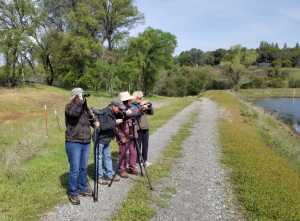 A good group of six enthusiastic participants plus three trip leaders managed to log 57 species on the LOP  Waste Treatment Plant field trip. Ten duck species graced the ponds, with a male Cinnamon Teal getting best in show honors, but the many pairs of Wood Ducks came in a close second. Two female Hooded Mergansers were good additions, but we could not find a male. One pond sported a Greater Yellowlegs, a common spring migrant in the Central Valley, but a bird rarely seen in Nevada County. A Spotted Sandpiper, still spotless, picked mud with the yellowlegs. Two active Bushtit nests were fun to watch; several birders had never seen the huge nests built by these tiny birds. We cleaned-up on swallows, ticking five species (Cliff, Barn, Tree, Violet-green, and Northern Rough-winged). Noisy swarms of Cliff Swallows cruised the sky, some dropping down to gather mud at pond edges, then flying to their favored building to dab the mud on their new constructions or repair old ones. Western Bluebirds were seen well 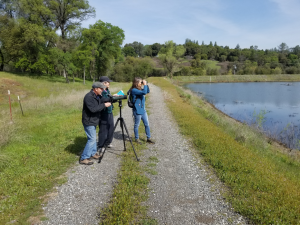 as they guarded their nests from competing Tree Swallows. Never out of earshot was the cacophonous and continuous chorus of displaying male Red-winged Blackbirds. A well-marked male “Myrtle” Yellow-rumped Warbler was a nice find; however, other warblers disappointed us, as only one Orange-crowned Warbler was heard singing from a shrubby hillside, never giving us a view. 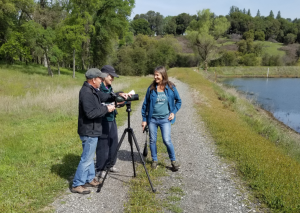 Compensating for the poor warbler show was a rare and very shy White-throated Sparrow, which allowed everyone at least a few glimpses as it hugged the foliage. Hopefully, we will be able to arrange another field trip to this great birding venue in the not too distant future.