Tricolored Blackbird: A Species in Trouble 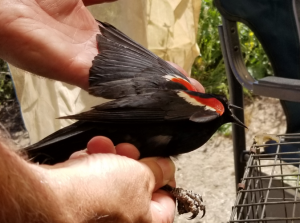 Male Tricolored Blackbird in the hand

Dr. Robert Meese has been studying Tricolored Blackbirds intensely for over 17 years. In that time he has banded more than 105,000 birds. On the weekend of May 15, we took part in his banding efforts at the Conaway Ranch, an 18,000 acre property near Woodland, which has one of the largest Tricolored Blackbird breeding colonies in existence, with a population estimated to be between 15,000 and 20,000 birds. During the weekend of our visit, more than 600 birds were banded, with not a single bird killed or injured. The highlight was the recapture of a female that Dr. Meese had banded 12 years ago, meaning she was at least 13 years old. 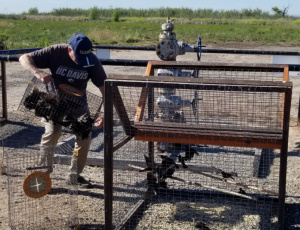 At one time breeding colonies numbered two to three million birds, but this species has undergone a population decline of nearly 95% in the past 50 years. Now, the largest colonies number in the low tens of thousands. Dr. Meese’s work documents shifts in breeding distribution, patterns of movement, and breeding successes and failures of this species of concern. Your donations and membership dues help SFAS to continue to provide financial support for this vital project.